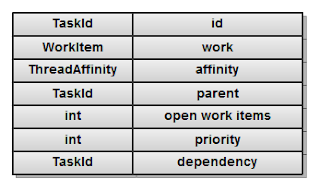 I haven't implemented this because it complicates the model by introducing two different completion states for tasks. One where some thread has completed the task (and dependent jobs can run) and another where all threads that took on the task have completed it (and buffers allocated for the task can be freed). Also, context switching is mainly a problem on PC which isn't our most CPU constrained platform anyway.
Upplagd av Niklas kl. 11:09 AM 46 comments: