Screen space reflections are such a pain. When combined with taa they are even harder to manage. Raytracing against a jittered depth/normal g-buffer can easily cause reflection rays to have widely different intersection points from frame to frame. When using neighborhood clamping, it can become difficult to handle the flickering caused by too much clipping especially for surfaces that have normal maps with high frequency patterns in them.

Last year I spent some time trying to understand this problem a little bit more. I first drew a ray diagram describing how a reflection could be reprojected in theory. Consider the goal of reprojecting the reflection that occurs at incidence point v0 (see diagram bellow), then to reproject the reflection which occurred at that point you would need to: 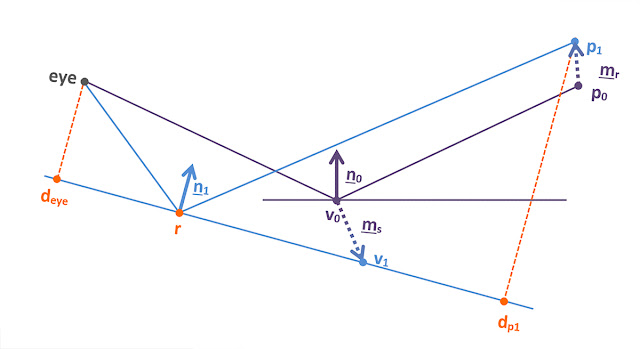 By adding to Stingray a history depth buffer and using the previous view-projection matrix I was able to confirm this approach could successfully reproject reflections.
You can see in these videos that most of the reprojection distortion in the reflections are addressed:

Ghosting was definitely minimized under camera motion. The video bellow compares the two reprojection method side by side.

LEFT: Simple Reprojection, RIGHT: Correct Reprojection
(note that I disabled neighborhood clamping in this video to visualize the reprojection better)

So instead I tried a different approach. The new idea was to pick a few reprojection vectors that are likely to be meaningful in the context of a reflection. Originally I looked into:
The idea of doing parallax correction on motion vectors for reflections came from the Stochastic Screen-Space Reflections talk presented by Tomasz Stachowiak at Siggraph 2015. Right now here's how it's currently implemented although I'm not 100% sure that's as correct as it could be (there's a PARALLAX_FACTOR define which I needed to manually tweak to get optimal results. Perhaps there's a better way of doing this)? Once all those interesting vectors are retrieved, the one with the smallest magnitude is declared as "the most likely succesful reprojection vector". This simple idea alone has improved the reprojection of the ssr buffer quite significantly (note that if casting multiple rays per pixel, then averaging the sum of all succesful reprojection vectors still gave us a better reprojection than what we had previously)

Screen space reflections is one of the most difficult screen space effect I've had to deal with. They are plagued with artifacts which can often be difficult to explain or understand. In the last couple of years I've seen people propose really creative ways to minimize some of these artifacts that are inherent to ssr. I hope this continues!